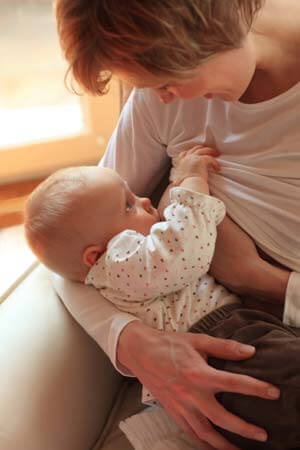 Really, Come On, One bottle of Formula Really Could Not Make a Difference… Right? Well, actually, it could! Breast milk is best and the smaller and younger the baby, the bigger the difference! Add on the exposure that new born babies get who are in the hospital, who have been on antibiotics, or who are not allowed to breastfeed or are unable to breastfeed, and you have possible life threatening circumstance from just ONE bottle.

Here are the facts: Before birth, the stomachs of babies are sterile and have no bacteria. Babies born through the vagina get the good bacteria of their mothers in to their stomachs. Babies born by surgery (cesarean) get their first bacteria from the air, the staff at the hospital, and the linens and equipment of the hospital, unless they go immediately to the skin of the mother, which is not always practical. The more separation from the mother and her life saving bacteria, the more contamination of the baby’s stomach and intestines by other bacteria.

After birth, babies who receive their mother’s fresh milk are the healthiest. By four days of life the differences in the bacteria in the babies stomachs are striking. Some of the deadliest bacteria just simply can not live in a breast milk environment. Breast milk is best and ANY formula will dilute this protective environment and could change how sick the baby will be in the future! The first seven days are critical to the development of a healthy gut and babies who are fed formula may not ever be able to develop the healthy levels of the good bacteria that protects them for future illnesses.

Additional reasons to breast feed /resources/breastfeeding/ and avoid formula in the first year of life are: It is not needed and often can cause the mother to produce less milk the next day. (less demand from baby leads to less emptying of the breast and less milk production…..this is the way babies are weaned)

In families with a history of cows milk allergies, babies given cows milk proteins early in life through formula develop earlier and more sever milk allergies. Also, avoiding cows milk protein in the first months of life reduces the incidence of insulin dependent diabetes in later life. Your baby needs your milk and if not yours, consider a human milk bank https://www.rchsd.org/programs-services/neonatology/parent-education/donor-breastmilk/ before you resort to formula! Article by: Rosanne Gephart, CNM