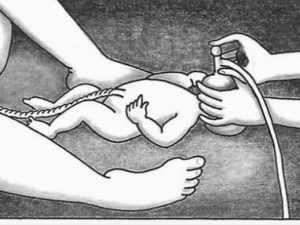 At one minute after birth, approximately 80mL of blood is transferred from the placenta, which increases to approximately 100mL at three minutes after birth. This blood supplies the infant with a significant amount of iron. Lasting protection is provided as it has been shown to not only increase hemoglobin levels at birth, but also lead to increased iron stores in infants several months after. This is significant as iron is immensely important to proper neurodevelopment.

Recommendations vary in the amount of time that clamping should be delayed, but many midwives choose to wait until after the cord has stopped pulsating to allow infants to obtain the most benefits. The American College of Nurse-Midwives maintains that “delayed cord clamping should be the standard of care in all birth settings for term and preterm newborns.” The benefits of delayed clamping extend to both preterm and term infants.

A recent study found that delayed cord clamping is appropriate and beneficial for infants requiring resuscitation after birth. In fact, the study found that keeping the cord intact during resuscitation (as opposed to clamping the cord prior) led to better infant outcomes including increased oxygen saturation, higher Apgar scores, and a faster establishment of regular breathing.

There are significant gaps in data collection regarding the use of delayed cord clamping in California hospital settings, but it is established that the usage widely varies, and preterm infants are more likely to have delayed clamping than term infants.

As a birth center that recognizes the importance of practicing evidence-based care, Best Start Birth Center practices Delayed Cord Clamping as the standard of care, providin